"MAY YOU ALWAYS BE SURROUNDED BY GOOD FRIENDS AND GREAT BARBEQUE." 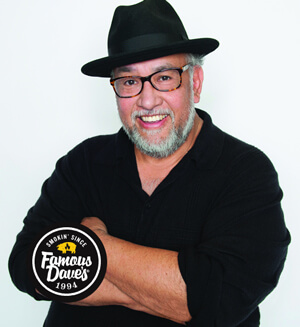 Famous Dave is the most awarded Pitmaster in history — a true originator blessed with a great sense of taste and a passion for creating only the best of the best. Even among BBQ champions, Dave is recognized as the authority on the art of cooking with smoke and flame.

Dave Anderson, founder of Famous Dave’s, lives for barbeque. Growing up in Chicago, Dave’s passion for ribs began as a young boy when his dad would bring ribs home — the best tasting slow-smoked spareribs from street corner vendors who used 55-gallon smokers filled with charcoal and smoldering green hickory wood. They were the legendary ribs just like the champion Pitmasters used to smoke way down in the Deep South.

The passion for barbeque grows and the restaurant dream begins.

Dave spent more than 25 years of his adult life searching all over the country for the best barbeque and feasting on a variety of smoked meats available from every barbeque joint he could find — from the neighborhood storefront BBQ shacks in Memphis, Kansas City, and Chicago, to the backwoods smokehouses found in the southern foothills of Georgia, Tennessee, the Carolinas, and finally, to the huge mesquite pits of Texas. Through his journeys, Dave discovered that there is no other way to smoke good “que” than to first hand-rub each slab with a blend of southern spices, then slow smoke ’em in a pit of smoldering hickory. This is the time-honored way, the traditional way used by champion Pitmasters down in the Deep South. These were the kind of ribs Dave had grown to love as a boy in Chicago — the kind he knew, along with his barbeque sauce, would someday make his barbeque famous.

A dream comes to Hayward, WI, and beyond.

In 1994 Dave’s dream became a reality when he purchased a small resort on Big Round Lake in Hayward, Wisconsin. The resort, with eight cabins, had a restaurant and bar that was rebuilt in the style of a magnificent Adirondack Lodge. From the beginning, the first restaurant, named “Famous Dave’s BBQ Shack,” was a tremendous success — serving as many as 1,000 in a night.

National awards for “Best Ribs” and “Best Sauce in America”

In November 1995, Famous Dave’s was named 1st place winner for its Rich & Sassy® barbeque sauce at the American Royal Barbecue Sauce Contest in Kansas City, Missouri — the largest and most prestigious barbeque contest in the world! Since then, Famous Dave’s has won one award after another including Greatest Ribs in America, Greatest Sauce in America, Best New Restaurant and Best Dessert. Dave’s commitment to quality. A Famous Dave’s rib is better from the start. Dave understands you can’t wind up with the best-tasting barbequed ribs if you don’t start with the best quality raw product — the St. Louis sparerib. Dave insists on a slab of ribs of more than 2-1/2 pounds. This large slab of ribs has gained Famous Dave’s the national distinction of being the “Home of the Big Slab!” It costs a bit more for this level of quality, but take one look, and especially one bite, and you’ll taste the difference of a Famous Dave’s rib.

Learn More About Us

Questions or Comments?
We'd love to hear from you!

Our Founder, “Famous” Dave Anderson has taken home another trophy on an elite pitmaster vs pitmaster competition television show.

Congratulations to our founder, “Famous” Dave Anderson, for his big win on an episode of the Bar-B-Que Competition SMOKED television show. Dave went hog-to-hog against the most elite pitmasters in the industry. And, just as he has done more than 700 times before, he smoked ’em.

As part of the season finale, the competitors were not only battling for the title of SMOKED Champion, but also to raise money for charitable causes, with the winner receiving $5000 to donate to their designated charity, and the loser donating an additional $5000 out of their own pocket to the winner’s charity.

As the SMOKED Champion, Famous Dave’s directed both its $5000 award and the out-of-pocket $5000 from Sonny’s to the non-profit, Operation BBQ Relief. In a surprise twist, the team from Famous Dave’s decided to donate an additional $5000 to Sonny’s charity of choice, Random Acts of BBQ, so that everyone could win. In total, $15,000 was donated to charitable causes.

Newly crowned SMOKED Champion, Famous Dave Anderson said, “In the spirit of bettering our communities, Famous Dave’s is proud to donate the award money to Operation BBQ Relief, as well as donate to Sonny’s charity of choice, Random Acts of BBQ. Being a contestant on SMOKED was an incredible experience, and it was an honor to appear alongside our impressive competitors. I want to thank our ‘Famous’ franchisee and championship pitmaster, David Marks, for the invaluable role he played as part of the Famous Dave’s team, as well as thank the prestigious panel of judges.”

“We are thrilled (but not surprised!) by our Founder’s continued legacy of preparing award-winning bar-b-que,” said Alfredo Martel, Chief Marketing Officer.  “We are so proud of how Famous Dave’s was able to turn this bar-b-que win into a community win.”

Sink Your Teeth Into This!
Like Free Stuff? Sign Up For Rewards!
Download our app and earn "BONES" for each visit, receive exclusive offers, and get a FREE burger or sandwich just for signing up! OR join the Famous Nation to receive news, offers, and a tasty gift for your birthday!
Join the
Famous Nation 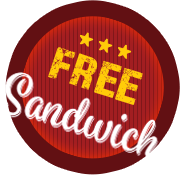